MyndTec Inc. is a medical technology company based in Mississauga, Canada, dedicated to the development and commercialization of innovations that improve function, maximize independence and enhance the quality of life. The economic benefit of achieving these goals impacts a full range of stakeholders including patients, their families, healthcare systems, private insurers and governments.

MyndMove, the company’s first product, is a non-invasive functional electrical stimulation device indicated for the improvement and recovery of voluntary arm and hand function and active range of motion in patients with paralysis or paresis following stroke or spinal cord injury.

There are approximatively 50,000 strokes in Canada annually. There are about 300,000 people living with effects of a stroke.

There are 86,000 people in Canada living with spinal cord injury. Over 40% of patients need personal assistance with activities of daily living. 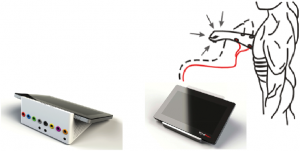 Clinical Evidence for MyndMove in Stroke Rehabilitation (Click to expand) 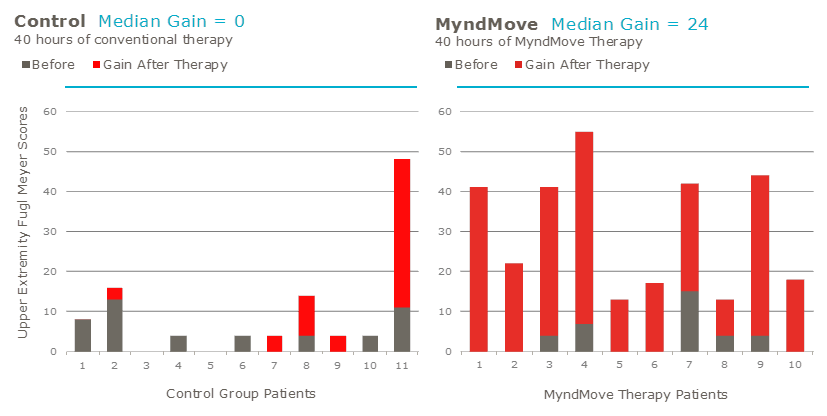 Improvements in voluntary reaching and grasping functions in the MyndMove treatment group translated into significant increases in self-care functional independence measures and the ability of individuals to the perform activities of daily living such as feeding, grooming, dressing, bathing, and toileting. 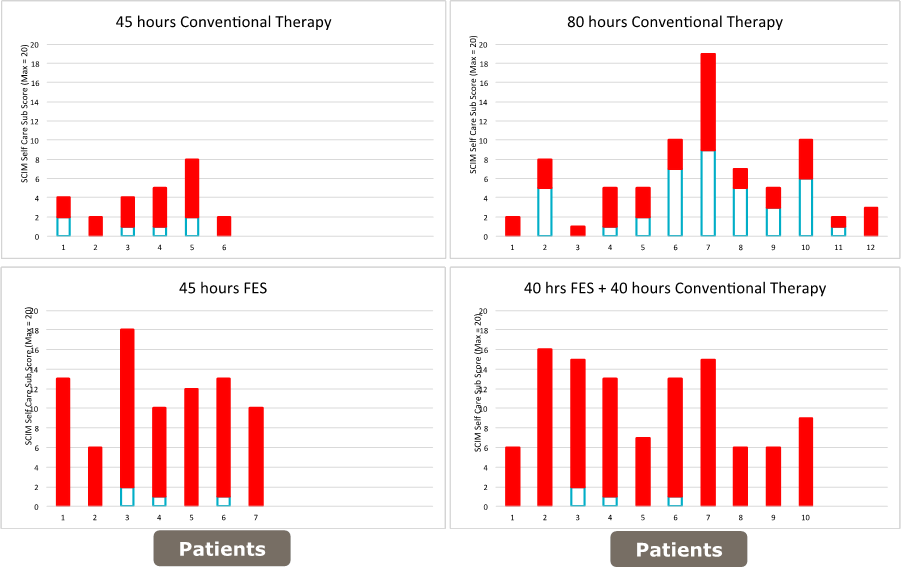 MyndMove is the first functional electrical stimulation device to address therapy needs across the entire spectrum of upper extremity impairment, from marked paralysis to mild hemiparesis. A menu of pre-programmed MyndMove protocols allows clinicians to progress from proximal (shoulder and elbow) broad reaching movements and advance to distally (hand and fingers) fine pinching and grasping movements. The availability of eight stimulation channels enables the selection of complex movement protocols that combine reaching and grasping movements for stroke patients or bilateral movement protocols for spinal cord injury individuals. Preprogrammed movement protocols have been developed to provide a full complement of purposeful movements including a variety of electrical stimulation facilitated hand and finger functions that include lateral pinch, palmar grasp, pinch grasp, lumbrical grasp, and tripod grasp.. The hand protocols are the most unique currently in the market.

The MyndMove device incorporates proprietary stimulation technology designed to overcome previous limitations of surface electrical stimulators and dramatically increase patient comfort and decrease fatigue. This is achieved by allowing muscle stimulation at a fraction of the voltage and current as compared to other stimulators in the market.

Treatment protocols have been designed to permit progression from proximal to distal movements and treatment of the entire upper extremity and from broad reaching to fine motor control such as grasping and pinching.

Clinical studies have shown that an intensive course of therapy, over 8-12 weeks, demonstrated significant and lasting recovery in arm function. 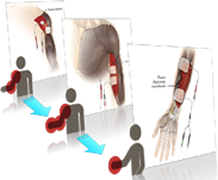 Over the course of the therapy, patients advance through a treatment regimen tailored to their recovery needs by their therapists.

MyndMove Therapy allows the therapist’s discretion in selection of movement Protocols for any particular session. This enables the therapists to reinforce recovered movements from previous sessions, introduce new movements or combinations from a selection of forward and side reach motions for the shoulder, to fine hand grasping and pinching control of fingers.

MyndMove can be integrated with other therapies and as part of a comprehensive neurorehabilitation program.

Occupational Therapists and Physiotherapists undergo a comprehensive course in the fundamental principles of MyndMove FES, device operation, protocol selection, and hands-on practice resulting in the therapist being certified for the therapeutic delivery of the MyndMove.

Who will benefit from MyndMove Therapy? (Click to expand)

MyndMove is a revolutionary non-invasive therapy that aims to restore voluntary movement to patients with upper limb paralysis following stroke or spinal cord injury. Individuals who have suffered paralysis or hemiparesis to the arm and hand as a result of stroke or spinal cord injury are candidates for MyndMove therapy. The overall benefit realized by an individual will vary depending on a number of factors including severity of the paralysis, number of treatments, frequency of treatments and length of time after the stroke before treatment is initiated. In order for patients to benefit from MyndMove, they must be medically stable, able to actively participate in and to communicate with the therapist during treatment. Physicians and clinicians will determine if MyndMove is appropriate for individual patients.

Novo Healthnet is participating in a clinical study which is designed to corroborate the results found in Dr. Popovic’s research. It will address the clinical feasibility and usability of MyndMove Therapy of sub-acute and chronic severe Hemiparesis of the Upper Limb following stroke.

Many stroke patients suffer weakness or paralysis of their arms and hands. They are often unable to grasp and reach objects voluntarily and have difficulty performing basic activities of daily life such as dressing, feeding, bathing and grooming. No other technology or therapy exists that significantly improves voluntary movement to severely paralyzed stroke patients. Despite extensive rehabilitation programs, many of these individuals remain dependent on others for assistance with activities of daily living. This unmet medical need remains the focus of a wide range of research efforts.

MyndMove is a non-invasive medical device that uses short, low energy electrical pulses to induce muscle contractions. A variety of therapeutic stimulation sequences (TSS) or protocols have been designed to provide diverse reaching and grasping movements. Each TSS is designed to allow occupational therapists and physiotherapists to enable specific coordinated and articulated movements in the paralyzed arm and fingers in stroke patients. MyndMove enables a therapist to generate a full range of reaching and grasping movements, which the patient is unable to perform by him/herself. By using the MyndMove therapy to help the patient move his/her arm(s) and hand(s) as he/she attempts to carry out typical reaching, grasping and object manipulation movements, the patient gradually improves their ability to perform these tasks voluntarily.

If you are interested in participating in the MyndMove Therapy Clinical Study (if you meet inclusion criteria), please download the referral form below and fax or email it to the locations listed below.
Referral forms will be accepted and reviewed between September 1, 2014 and January 31, 2015.